Jacques Offenbach’s stage work includes 102 scores – his opéra bouffe “La Belle Hélène” is one of his greatest successes. Unhappy in her marriage to the elderly King Ménélas, Hélène, the most beautiful woman in the world, longs for passion. During a tournament, she notices Pâris, disguised as a shepherd. He comes to her during the night and they succumb to passion. Ménélas surprises the two adulterers, but Pâris and Hélène manage to escape… At its premiere in Paris in 1864, Offenbach’s operetta caused a massive scandal, because the performer playing Hélène wore a costume considered frivolous. Under the mantle of parody Offenbach was able to include numerous erotic innuendos and explicit scenes in his operettas, which would have otherwise been cut by the censors. As a satire, “La Belle Hélène” takes aim at the bourgeoisie and its bigotry.
André Barbe and Renaud Doucet, the directors of this production, have moved the action to a cruise ship during the 1960s: their imaginative, witty production is sure to lift your spirits!

In French with German surtitles

Because of a small mishap while on shore, a passenger on a cruise ship returns as a different woman than the one who went on board…

During the sacrifices at the altar of Jupiter Stator, the populace displays a lack of respect. Calchas, the Grand Augur, fears that the authority of the Gods is declining. Hélène appears, accompanied by women in mourning. They lament the death of the beautiful youth Adonis – yet another, who can no longer give them the love they long for so much. It is no wonder that they are frustrated, since Helen is married to King Ménélas, who shows little interest in her.
Hélène asks Calchas about the story of Mount Ida: did not Vénus promise the most beautiful woman in the world to the young shep-herd Pâris there? Moreover, is she not herself the most beautiful woman in the world? What a twist of fate!
Oreste, the son of the Greek King Agamemnon and Hélène’s nephew, appears in the company of two ladies, Parthœnis and Léœna, with whom he spent a fortune of daddy’s money the previous day. Calchas doesn’t approve of such a happy-go-lucky attitude – at least so he says.
The next visitor is a young shepherd. Didn’t Calchas receive his letter? The carrier pigeon arrives on cue and brings an order in writing from Vénus: Calchas is to present the young shepherd to Hélène, since he is none other than Paris, the son of King Priam of Troy. He recounts once more that in his judgement on Mount Ida he did not give the prize apple to the goddesses Minerva or Juno, but to Vénus.
Hélène and Pâris meet each other and desire strikes them like lightening. First, however, Agamemnon calls out a contest of intellects. The Greek heroes present themselves: the two named Ajax, Achille, Agamemnon and Ménélas. One of the heroes should be able to solve the word-riddle. However, the winner is the shep-herd, who reveals himself as Paris and is idolized as the „man with the apple“. Hélène invites him to dinner –now she only has to get rid of Ménélas. Calchas arranges for the troublesome husband to be sent away. He proclaims the oracle of Jupiter: Ménélas must travel to Crete for a month. Urged by the crowd, Ménélas follows his orders.

Hélène dresses in high-necked clothing in order to conceal her charms while her husband is away. However, how she looks underneath is only one man’s business: namely, Paris’s. In any case, so she reasons, Vénus herself has apparently made the decision in this matter. Also, wasn’t her mother, Leda, herself the victim of a godly subterfuge?
Pâris, too, aims to employ a trick to reach his goal with a resisting Hélène. The intimate and quite promising tête-à-tête between them is interrupted by the royal company. In high spirits, they play the „Goose Board Game“. Calchas is caught cheating and is nearly lynched.
In order to return to Hélène’s good graces, Calchas is to provide her with a dream: a sweet dream of love with Pâris. What a twist of fate!
Indeed, Pâris appears and both surrender to the dream of love. Suddenly Ménélas bursts in and demands vengeance as a betrayed husband. Hélène tries to explain that it is his own fault: Why did he come back from his trip without warning? Ménélas’s Greek relations take his side and chase Pâris away. Pâris swears to return and takes Hélène away with him.

Lead by Oreste the people celebrate the fires of love, which Venus has now ignited in everybody’s heart. Hélène once again defends herself before Ménélas: In the end, it was only a dream!
Agamemnon and Calchas demand that Ménélas put an end to the immoral scourge of Vénus by sacrificing himself for Greece. However, Ménélas refuses. He has a better idea and sends a messenger to Cythera, the island of Vénus. A Grand Augur of Vénus is to come and remove the curse from Greece.
The Grand Augur of Vénus appears right away. He preaches the cult of exuberance and enjoy-ment of life. Vénus must be appeased by sacrifices. First, Hélène herself must bring a hundred white heifers, accompanied, of course, by the Grand Augur. Ménélas agrees – if that’s all that is necessary, then so be it! Once again, fate steps in: Hélène flees with the Grand Augur, who reveals himself as Pâris. Off to Cythera…! 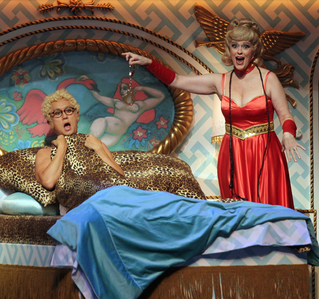 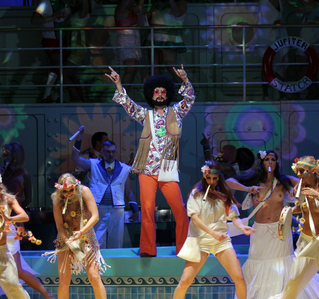 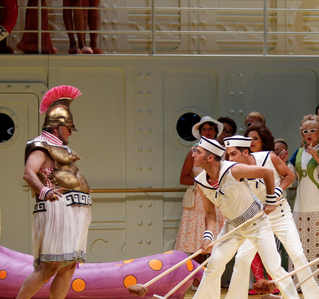 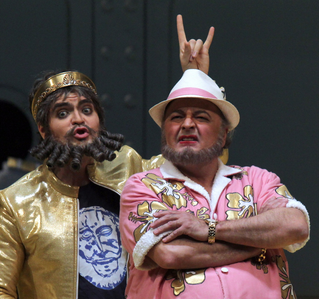 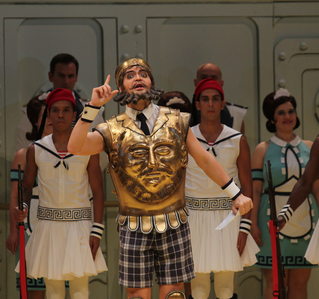 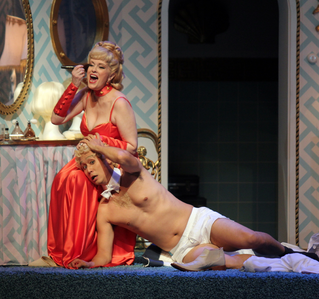 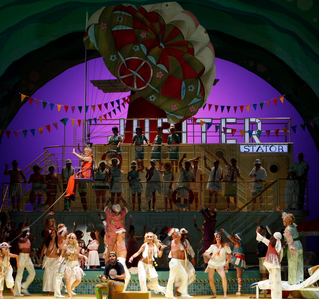 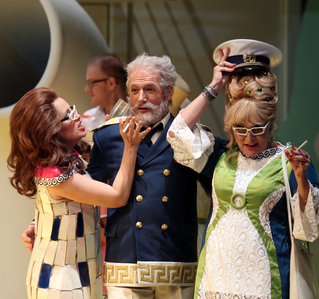