CAVALLERIA RUSTICANA
Turiddu and Santuzza are a couple; he has promised to marry her. However, when Turiddu meets up with his old love Lola again, he hardly pays any more attention to Santuzza. She takes revenge by inciting Lola’s jealous husband Alfio against Turiddu. Alfio challenges him to a fight.

I PAGLIACCI
Canio, an actor with a travelling theatre company, has learned that his wife Nedda has a lover. When he enacts the same situation on stage with her, the play becomes deadly serious: Canio loses control and stabs Nedda repeatedly with a knife. Dying, she calls her lover for help, and he reveals himself and also runs into Canio’s knife. The piece ends with his words, “The game is over.”

A break of 35 minutes after “Cavalleria rusticana”

A Sicilian village, about 1890. Early on Easter morning, Turiddu sings about his former beloved, Lola, now the wife of a wine carter, Alfio. As the town stirs, Santuzza, Turiddu's neglected sweetheart, comes looking for the handsome youth at his mother Lucia‘s tavern. The girl reveals that she has been excommunicated, but before she can explain why, Alfio comes by with friends, boasting about his pretty young wife.
A religious procession fills the square and enters the church for mass, leaving Santuzza to tell Mamma Lucia that Turiddu has taken up with Lola again. When the old woman has gone to mass, Santuzza confronts Turiddu with his betrayal. Lola passes by, and Turiddu follows her into church. Santuzza hurls a curse after him, then, consumed by jealousy, tells Alfio of Lola's infidelity. Santuzza immediately feels remorse, but the damage is done.
When the mass ends, Turiddu and the villagers drink wine, after which Alfio insults Turiddu, who accepts the challenge to duel with knives in a nearby orchard. He begs his mother to take care of Santuzza if he does not return. As Mamma Lucia and Santuzza wait anxiously, shouts rise in the distance. A woman stumbles in crying Turiddu has been killed.

Synopsis
Before the opera begins, the clown Tonio steps in front of the curtain to remind the audience that actors have feelings too, and that the show is about real humans.

PART I. Southern Italy, around 1865-70. Excited villagers mill about, as a small theatrical road company arrives at the outskirts of a Calabrian town. Canio, head of the troupe, describes this night's offering, and when someone jokingly suggests that the hunchback Tonio is secretly enamoured of his young wife, Canio warns he will not tolerate any flirting with Nedda. As the vesper bells call the women to church, the men go to the tavern, leaving Nedda alone. Disturbed by her husband's vehemence and suspicious glances, she envies the freedom of the birds soaring overhead. Tonio appears and indeed tries to make love to her, but she scorns him. Enraged, he grabs her, and she lashes out with a whip, getting rid of him but inspiring an oath of vengeance. Nedda in fact does have a lover – Silvio – who now arrives and persuades her to run away with him at midnight. But Tonio, who has seen them, hurries off to tell Canio. Before long the jealous husband bursts in on the guilty pair. Silvio escapes, and Nedda refuses to identify him, even when threatened with a knife. Beppe, another player, has to restrain Canio, and Tonio advises him to wait until evening to catch Nedda's lover. Alone, Canio sobs that he must play the clown even though his heart is breaking.

PART II. The villagers, Silvio among them, assemble to watch the play „Pagliaccio e Colombina“. In the absence of her husband Pagliaccio (played by Canio), Colombina (Nedda) is serenaded by her lover Arlecchino (Beppe), who dismisses her buf-foonish servant, Taddeo (Tonio). The sweethearts dine together and plot to poison Pagliaccio, who soon arrives; Arlecchino slips out the window. With pointed malice, Taddeo assures Pagliaccio of his wife's innocence, stirring up Canio's real-life jealousy. Forgetting the script, he demands that Nedda reveal her lover's name. She tries to con-tinue with the play, the audience applauding the realism of the „acting“. Maddened by her defiance, Canio stabs Nedda and then Silvio, who has rushed forward from the crowd to help her. Canio cries out that the comedy is ended. 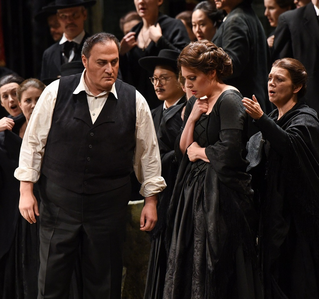 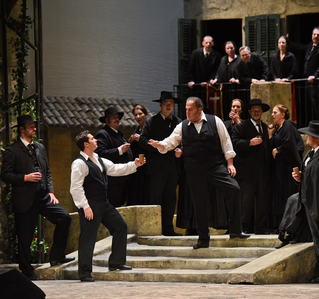 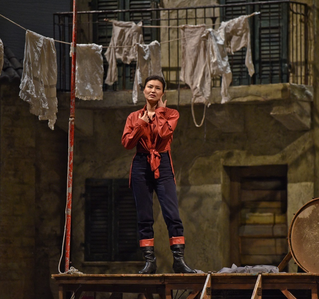 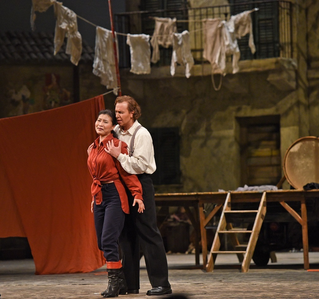 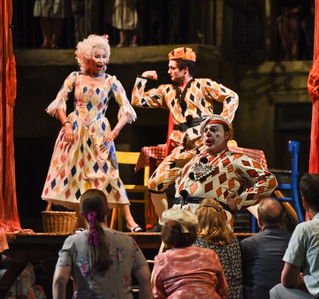 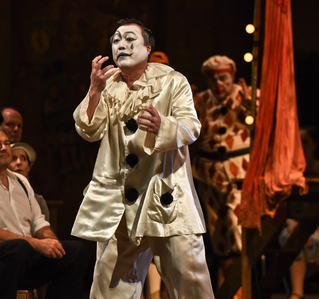