“Don‘t you know the horrible dark place, don’t you know the evil one lives there?” Hastily, their parents set out for the woods to save Hansel and Gretel from the witch Rosina Leckermaul. As they feared, the children have got lost in the woods and found the gingerbread house. They cannot resist the sweet temptation – and fall straight into the trap of the witch, who likes children so much she could eat them up… literally.
As in most tales of the Brothers Grimm, in Engelbert Humperdinck’s setting of the fairytale all ends well: until that point, however, Humperdinck’s romantic music accompanies the children deep into the dark forest of legend. Here it invokes magical beings, calls on 14 angels to protect the siblings and allows the witch to ride her broomstick through the air. Today, Humperdinck’s classic, premiered in Weimar in 1893, is as much a part of Christmastime as gingerbread and tree decorations – and has invited young audiences and those young at heart all over the world into its fairytale world ever since.

In German with German surtitles

This production will be adjusted to the current situation.

In the broom-maker‘s house, Hänsel and Gretel are busily working, and both are very hungry. When Hänsel begins to lament Gretel tells him about a fresh pot of milk given to their mother by a neighour’s wife. The prospect of a fine porridge dispels their worries for the moment. They dance around the room forgetting their work. The mother returns home and is quite upset at what she finds. In attempting to punish the naughty children, she knocks the pot of milk clattering to the floor. Hänsel cannot stifle his laughter and the children are sent into the forest to gather strawberries. Their mother is despondent over their poverty and while asking God’s help, she sadly falls asleep. The broom-maker comes home feeling quite satisfied with having sold out all his brooms today, and happily unpacks all the food he has bought. He is shocked to learn that the children have been sent out alone into the forest. He is afraid they may lose their way and fall into the hands of the wicked witch who lives near the Ilsenstein. The parents hurry into the forest to find their children.

Hänsel and Gretel are lost in the forest. They can no longer find their way home in the darkness. When the sandman puts them slowly to sleep, they sing their evening prayer. The fourteen angels of the prayer appear in their dream.

Next morning, the dew fairy awakens the children who, very near, discover a little gingerbread house. They call in vain to the house, and then sneaking closer and closer begin to eat the gingerbread. The wicked witch suddenly appears and casts a magic spell over the children. She locks Hänsel into a cage and begins to fatten him for the baking. The oven is almost ready, and in wild joy over the forth-coming feast, she rides her broom through the air. When the witch orders Gretel to crawl into the oven and look at the dough, Gretel pretends to the dumb in order to let the witch show her what she means. Hänsel who has secretly escaped from the cage pushes the witch into the oven and both children quickly shut the door behind her. With a tremendous bang the oven explodes. Suddenly to their amazement, they see children emerging from around the house. They had all been transformed into gingerbread by the wicked witch for hundreds of years. The broom-maker and his wife find Hänsel and Gretel and all reunite for a happy ending. 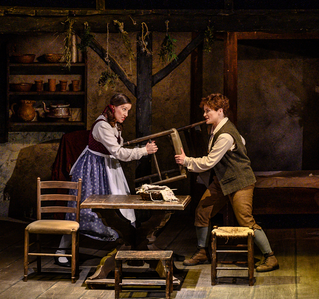 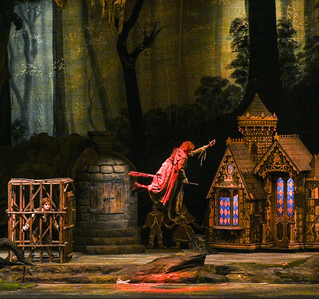 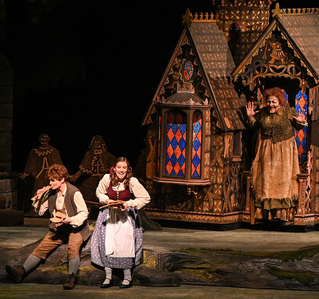 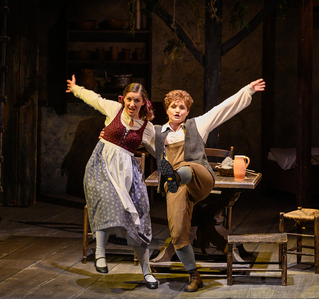 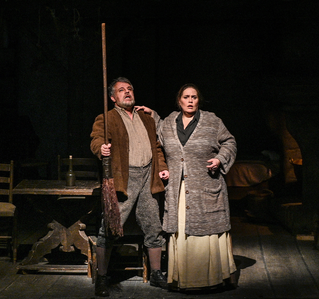 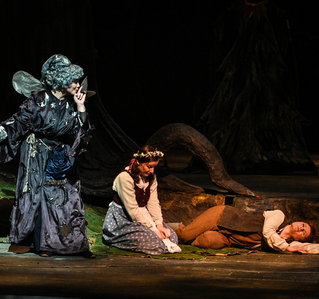 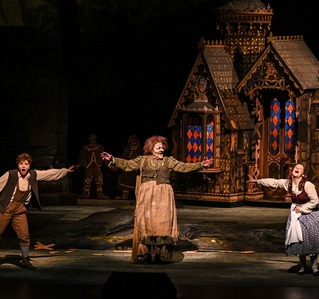 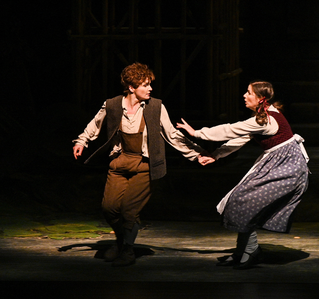 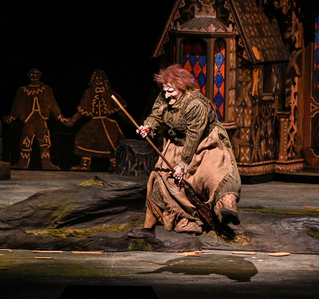 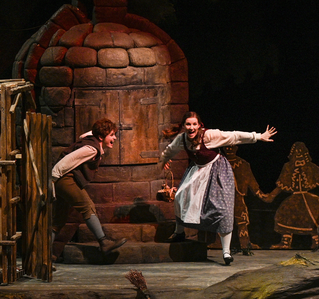 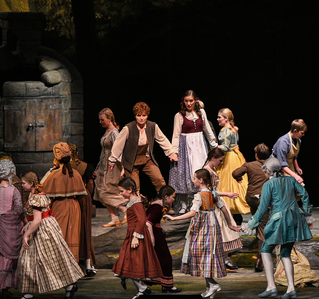