Nagasaki, Japan, ca. 1900: Pinkerton, a lieutenant in the American navy, has fallen in love with Cio-Cio-San, also known as “Butterfly”. The Japanese ritual marriage ceremony is merely a farce to him – and shortly thereafter, Pinkerton’s “plaything” is alone again, with their child. Three years later, he returns to Japan, but not because of Butterfly. Together with his new wife, he intends to pick up the child and take it to American with him. Butterfly commits suicide. The opera’s world premiere in 1904 was a historic fiasco: the audience at Milan’s La Scala failed to understand the exotic subject. Puccini, however, believed in the piece: “My Butterfly remains what it is. It is the most emotional opera I have written!” He was right: only a few months later, an altered version of Madama Butterfly proved a rousing success when it was premiered at the Teatro Grande in Brescia. To this day, Puccini’s “tragedia giapponese” has remained one of the most popular and moving operas ever written.

[Read more]
Act 1
Japan at the turn of the 20th century. During a visit of the American cruiser „Abraham Lincoln“ to Nagasaki, Lieutenant Pinkerton, one of the ship’s officers, meets the delightful Cio-Cio-San, known as Butterfly, in Goro’s tea-house. He soon falls in love with her and, although she has been under the rigid surveillance of her family, he contracts a marriage with her according to the local custom. This marriage, conforming to Japanese law, can be dissolved by the husband at any time. Goro, who is a clever business man, has procured, for a suitable consideration, a pleasant country-house for the young couple. It is here, in the presence of Cio-Cio-San’s friends and relatives, that the marriage takes place. Sharpless, the American Consul, has also been invited. He feels it his duty to warn the rather frivolous Pinkerton that in his opinion the young Japanese girl is likely to take the union very seriously. Butterfly enters, accompanied by young friends, and ceremoniously greets her husband-to-be. Following her come the other wedding guests, all examining the little house and the bridegroom with curiositiy and making comments about them. – Butterfly shows Pinkerton her few belongings, among which is a dagger with which her father, on orders from the Mikado, killed himself. She tells him that she has just been at the mission-house and has been accepted into her bridegroom’s faith. This last news has also reached her uncle Bonzo, and his sudden menacing appearance at the wedding and the curses he flings at Butterfly bring the ceremony to an abrupt end. Pinkerton, how-ever, comforts the tearful Butterfly and carries her, enchanted by her loveliness, into the house.

Act 2
Two years have passed and Pinkerton has sent no news from America, but not even the doubts expressed by Suzuki, the maid, can shake Butterfly’s belief and confidence in her husband’s eventual return. Then Sharpless arrives with a letter from Pinkerton. He is accompanied by Goro, who for a long time has been trying to persuade Butterfly to marry the rich Prince Yamadori. Butterfly is transported with joy at the possibility of Pinkerton’s return, and the Consul’s attempts to hint at the real reason for Pinkerton’s letter fall on deaf ears. Only when he makes clear to her that Pinkerton will never return to her does she react. Leaving the room she returns a moment later with her small child, Pinkerton’s son. Sharpless is deeply touched by her loyalty to Pinkerton and promises to contact him on her behalf. Goro, who has spread the rumour all over the town that the identity of the child’s father is unknown, is hounded out of the house by Butterfly, armed with her father’s dagger. A cannon-shot from the harbour announces the arrival of Pinkerton’s ship. Triumphantly Butterfly decorates the house with flowers and dorns herself and her child in preparation for the reunion. She has bored three small holes into the wall of the house and through them she, the child and Suzuki keep watch in the direction of the harbour and await Pinkerton’s arrival.

Act 3
The next morning. Pinkerton has not come and Butterfly falls asleep. Soon Pinkerton and Sharpless are climbing the hillock on their way to the house. They are accompanied by a young woman – Pinkerton’s wife. Pinkerton cannot find the courage to tell Butterfly the truth and hurries away again. Butterfly appears and, seeing the stranger, realizes who she is. She knows now that Pinkerton is not coming back to her but wishes instead to take his child away with him. Calmly she declares that she wishes to hand the child over to him only and that he should return in half an hour. From her sacred shrine she takes her father’s dagger, embraces her child for the last time and, concealing herself behind a screen, kills herself. 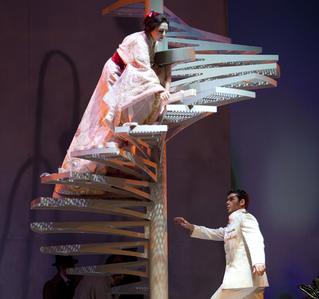 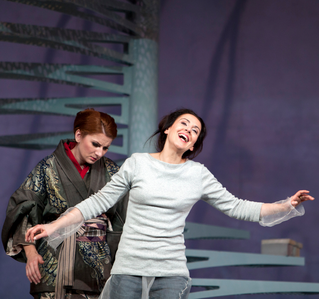 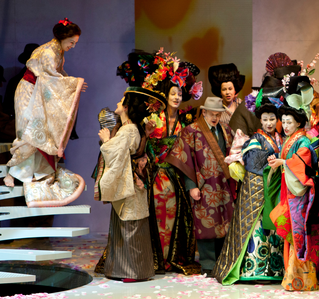 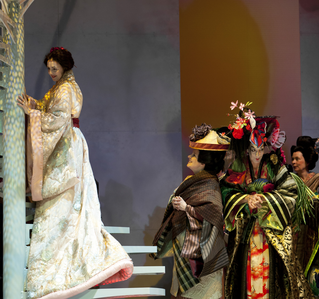 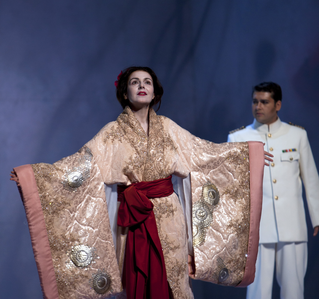 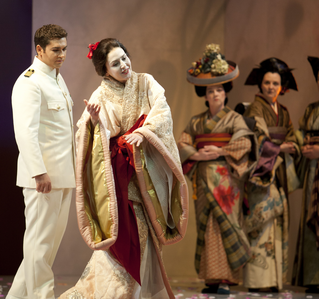