Scarpia, Rome’s chief of police, desires Tosca. Since her lover, the painter Cavaradossi, is among the government’s political enemies, Scarpia has him imprisoned. He orders Cavaradossi’s execution and hopes to force Tosca into granting him one night with her, in exchange for Cavaradossi’s release. She, however, thwarts his plans…

Following the fall of his government, Angelotti, as consul of the Republic of Rome, has been arrested. He has escaped from the Castle of Sant‘ Angelo and is searching, in the Church of Sant‘ Andrea Della Valle, for the key to his sister’s family chapel which she has hidden there. The plan for him is to assume woman’s clothing in order to help him in his escape. Coming upon Cavaradossi, the painter, who is working on a wall-painting, he recognizes him as his friend of many years‘ standing and a political sympathizer. The singer Floria Tosca, who is Cavaradossi’s beloved, enters the church. In the picture which Cavaradossi is painting she notes a striking resemblance to the Marchesa Attavanti, Angelotti’s sister, and her suspicions are aroused. Cavaradossi, who is already worrying about Angelotti’s presence in the church, is able only with great difficulty to dispel her jealous fears. – Angelotti is to hide himself in a well situated on Cavaradossi’s country estate. A cannon shot announces however that his escape from the Castle of Sant’Angelo has already been discovered. Cavaradossi exhorts his friend to hurry and shows him his escape route from the Attavanti’s chapel. – Scarpia, the mighty Chief-of-Police in Rome, orders the church to be searched. Cavaradossi’s empty food basket and a fan belonging to Angelotti’s sister are found. Scarpia begins to suspect the truth. Tosca returns once more to the church and when he shows her the fan she is again overcome by jealousy. She leaves, and Scarpia sends his henchmen to follow her.

Cavaradossi has been arrested. In the Palazzo Farnese, Scarpia orders him to be tortured in an attempt to discover from him Angelotti’s hiding-place. Cavaradossi remains steadfast but Tosca, who is forced by Scarpia to listen to her lover’s cries, eventually discloses the fugitive’s whereabouts. News is brought to Scarpia that Napoleon has won an important battle. At these tidings Cavaradossi cannot contain his enthusiasm and triumphantly gives vent to his feelings. This is a welcome opportunity for Scarpia to denounce him as an enemy of the Government and to condemn him to death. Tosca begs Scarpia to save her beloved and Scarpia names his price: it is to be Tosca herself. On the condition that a mock execution be arranged and Cavaradossi only appear to be shot, she acquiesces. Scarpia then writes a note authorizing Tosca and Cavaradossi to leave Rome without hindrance. As he approaches her she plunges a knife into him.

Before the execution Tosca tells Cavaradossi what has happened. Joyfully he listens as Tosca instructs him in the role which he is to play when the shooting-party arrives. The soldiers fire and Cavaradossi falls to the ground. Hurrying up to him Tosca discovers that Scarpia has tricked her – he has ordered a real execution and Cavaradossi is dead. She takes the only course left to her to escape her pursuers and leaps from the castle’s ramparts. 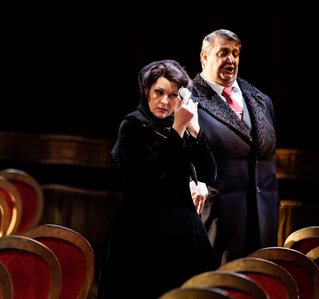 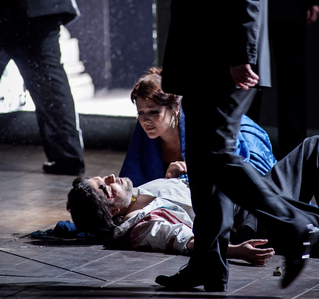 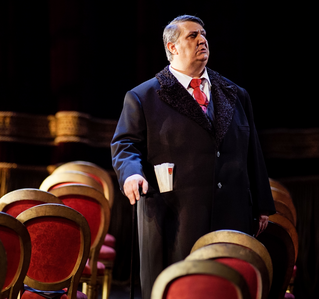 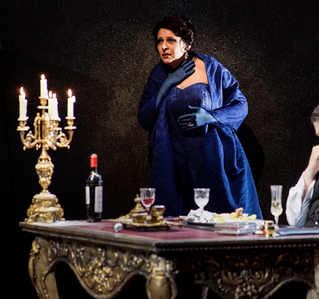 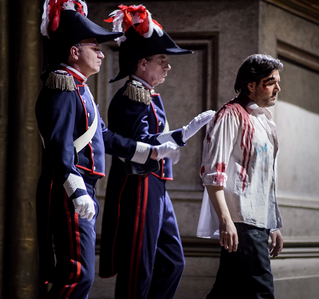 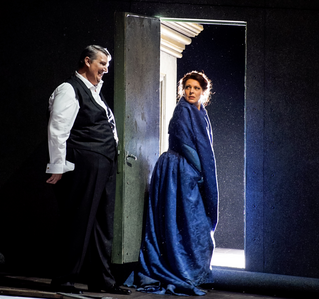 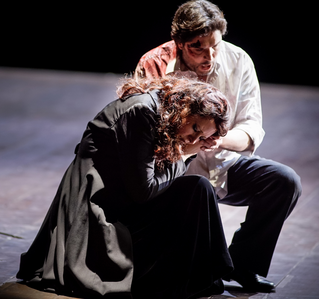