"John Neumeier’s Shakespeare adaptation has over time become a classic. After numerous revivals and revisions, the ballet has not lost any of its freshness. Once again, one is overwhelmed by the tragic passion of youth."
Die Welt

IN THE REPERTORY:
Royal Danish Ballet
The Tokyo Ballet

Scene 1
It is the morning before the feast day of San Zeno - patron saint of Verona. Brother Lorenzo, Romeo's childhood friend, finds him asleep on the steps of Capulet's house. Romeo is infatuated with Rosalind, Juliet's cousin, who is shortly to arrive for the festival.
From the balcony, Juliet greets Rosalind - but does not see Romeo. Benvolio jokes with his love sick friend. Among a group of actors who have come to perform during the festival, Romeo recognizes Mercutio.
Juliet's Nurse shops in the market with her servant Peter who is harassed by one of the Montague servants. An argument develops between the servants of the feuding families - the Capulets and the Montagues - and escalates into a street fight in which the heads of both houses, Romeo and Tybalt, Juliet's cousin, take part. The appearance of Escalus, Prince of Verona, puts an end to the tumult. He confiscates the swords of Montague and Capulet to symbolize a truce between them.
Capulet gives the Nurse an invitation list of for his ball which will be held that evening. Romeo snatches the list away and is entranced to find Rosalind's name among the invited.

Scene 2
Juliet, surprised while playing with her cousins in the bath, is presented a medallion by her mother - a symbol of adulthood and her eligibility to be married.

Scene 3
Capulet receives his guests in the courtyard of his villa.

Scene 4
Capulet, his wife, and Tybalt open the ball. Juliet and her cousins present an allegorical dance in honour of San Zeno. Juliet senses the glances of a young man and forgets her steps. Count Paris, chosen by Juliet's parents to be her fiancé, is introduced to her. In a quiet part of the ballroom, Juliet is surprised by Romeo, who suddenly appears beside her. Tybalt rudely interrupts their tender encounter.

Scene 5
The guests make their farewells.

Scene 6
Romeo, however, remains in the Capulets' courtyard and observes Juliet alone on her balcony. She sees him, and they discover and enjoy their spontaneous love.


The Second Day (The Festival of San Zeno)

Scene 1
Celebrations in the city have begun. Romeo sends Brother Lorenzo to Juliet to arrange for their secret marriage. The actors perform a play which seems to prefigure the destiny of the young lovers. The Nurse brings Romeo word of Juliet's acceptance.

Scene 3
Brother Lorenzo marries Romeo and Juliet secretly in hopes of ending the feud between their families.

Scene 4
The festivities continue. The drunken Tybalt provokes Mercutio, then kills him accidentally in a duel. In blind rage, Romeo revenges the death of his friend. In grief, Juliet's mother collapses on Tybalt's corpse. The actors escape from Verona taking Romeo with them.

Scene 2
Romeo, banished from Verona, has returned in disguise to spend the night with his wife Juliet. At dawn, he must leave. Juliet's parents announce their intention of marrying her to Paris that very day. She refuses.

Scene 3
Thoughts of Romeo give Juliet comfort and the courage to seek help from Brother Lorenzo.

Scene 4
Lorenzo gives her a vial containing a potion that will put her into a temporary but death-like sleep. In her imagination, the actors play out a happy ending.

Scene 5
When Paris comes to Juliet a second time, she agrees to the marriage.

Scene 6
Taking the potion, Juliet experiences a nightmare encounter with the dead Tybalt, but a vision of Romeo again promises a happy end...

Scene 7
Attempting to wake her, the Nurse and Juliet's cousins believe her to be dead.

Scene 8
On the way to Mantua, the Nurse informs Romeo of Juliet's death. He hurries back to Verona, missing Brother Lorenzo, who desperately searches for Romeo, in order to explain his plan.

Scene 9
Juliet is buried in the Capulet vault. When the procession of mourners leaves, Romeo remains. Believing that Juliet is dead, he stabs himself. Juliet awakens, and finding Romeo dead, joins him in death. 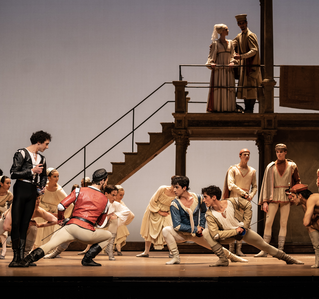 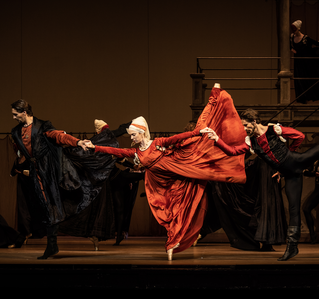 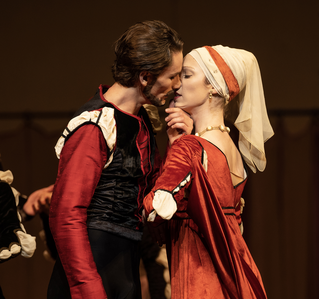 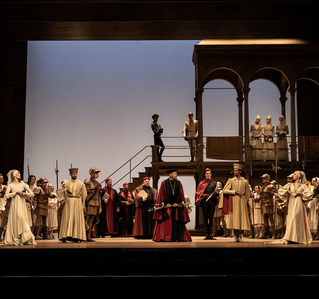 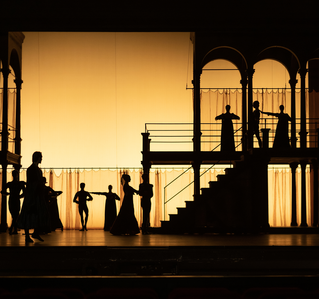 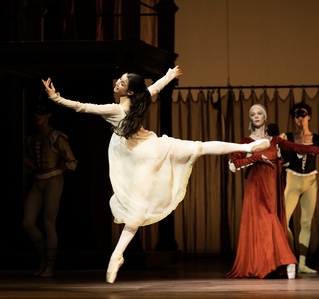 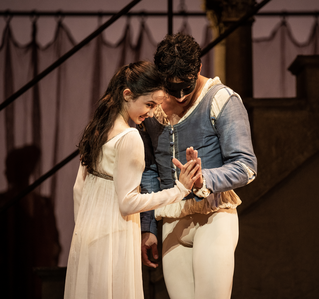