Due to the change in regulations, additional tickets are available for the 46th Hamburg Ballet Days. We ask you to purchase tickets primarily online or at our box office. General ticket sales for the 21/22 season will begin four weeks prior to the performance date until further notice, as long as no schedule deviations are being announced. Attendance at performances is subject to restrictions for the safety of our patrons. Everything you need to know about tickets and attending performances.

Opera in the park

With "Oper im Park", the singers of the International Opera Studio of the Hamburg State Opera and ensemble member Ida Aldrian as a guest will open the series "Draussen im Grünen" in the Music Pavilion in Planten un Blomen on June 25, 2021 at 4:00 pm. There will be "botanically inspired" music by Mozart, Rossini, Bizet and Bernstein. Tickets only at draussenimgruenen.de.

The Hamburg State Opera opens its season with Jacques Offenbach's "Les Contes d'Hoffmann" on Sept. 4, 2021. In Daniele Finzi Pasca's new production, you will experience, among others, Olga Peretyatko, former Opera Studio member and now one of the world's most sought-after sopranos, in all four female roles, as well as Benjamin Bernheim, "the most beautiful tenor voice since Luciano Pavarotti" (SZ), as Hoffmann. GMD Kent Nagano conducts the Philharmonic State Orchestra. Tickets and more...

The soprano and performer Donatienne Michel-Dansac is Donald Trump in "Playing Trump". The composition by Bernhard Lang will be premiered open-air at the Elbphilharmonie on August 20, 2021, in a production by State Opera Director Georges Delnon and under the musical direction of Emilio Pomaricò. The libretto by Dieter Sperl is based on original quotes by the former US president. A panopticon of words and power. Tickets and more...

The concert season opens as usual with the "Rathausmarkt Open-Air", conducted by GMD Kent Nagano. New: The open-air event directly in front of Hamburg's magnificent landmark will take place twice on each of two days - tickets required! On Aug. 14 with a symphonic prelude at 6 p.m. and 8:30 p.m. and on Aug. 15, 2021 with a tribute to Jacques Offenbach at 6 p.m. and 8:30 p.m.

Opera in the city

At three locations in Hamburg you can experience the opening premiere of "Les Contes d'Hoffmann" on 04.09.2021 time-delayed and open-air: At Jungfernstieg, as part of the Binnenalster Filmfest and in cooperation with Filmfest Hamburg, City Management Hamburg and the "Verein lebendiger Jungfernstieg" as well as also at the Rathausmarkt Harburg and on the parking deck of the Marktkauf-Center in Bergedorf. Read more...

Exclusively at the end of this season, the Hamburg State Opera is showing a current new production that has never been performed with a live audience: The premiere recording of "Lucia di Lammermoor" in Amélie Niermeyer's production is available for free on OperaVision.eu until 12:00 p.m. on Sept. 11, 2021. Experience, among others, Venera Gimadieva as the title heroine as well as Francesco Demuro as Edgardo and Christoph Pohl as Enrico. Donizetti's opera will then be back on the schedule in October 2021 and January 2022.

The graphic opera "WEISSE ROSE" about Sophie and Hans Scholl by David Bösch, Patrick Bannwart and Falko Herold brings especially young people closer to the important story - with music and a narrative style that corresponds to their time. The positive press reviews show that this has been successful. In the Making-Of you can learn more about the making of the film. The film is available free of charge in the ARTE Mediathek until 06.08.2021. Read more... 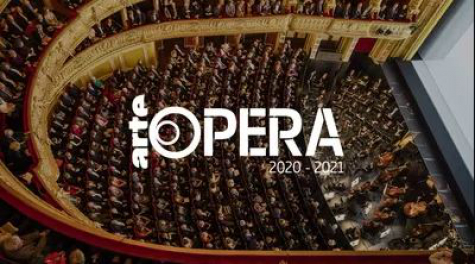 ARTE presents an online service in partnership with 22 European opera houses: "ARTE Opera Season." The performances of the participating opera houses will be broadcasted live every month (via "ARTE Concert") and will be available online. The Hamburg State Opera is partner and contributed the premiere of "Falstaff" from the 2019/20 season as a broadcast! Read more...